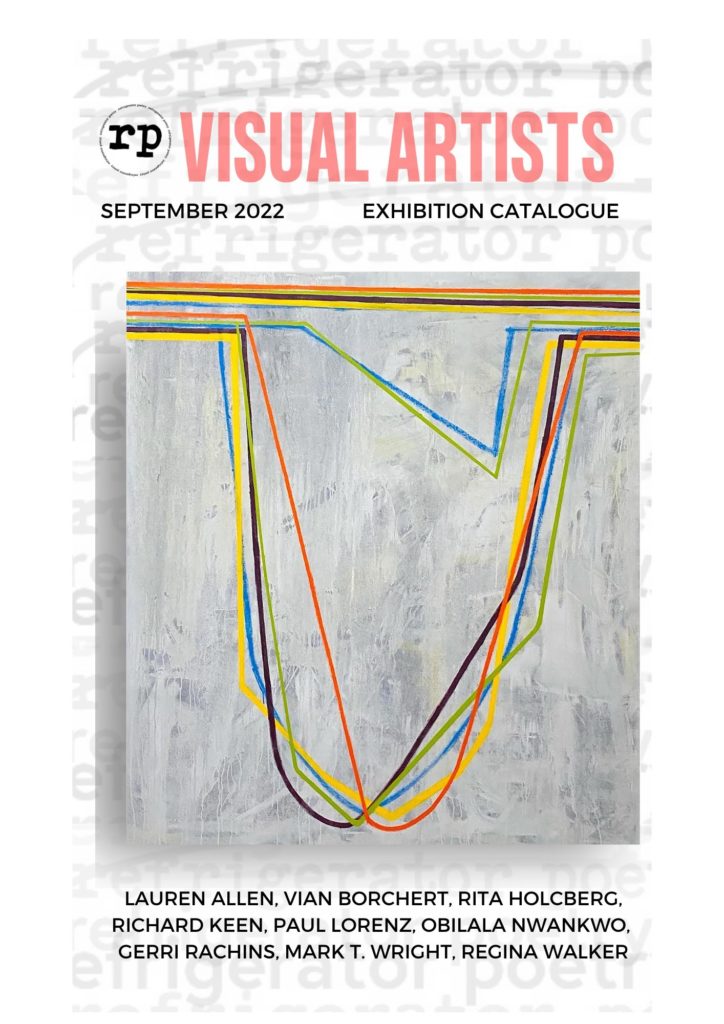 About the September Exhibition

Looking at the works of art that came to us this month, I was prompted to think about identity during times of transformation and temporality. Even though identity can feel fixed, we know that depending on the situation or moment in time, one aspect of our identity can be more prominent. What does an artist experience that distinguishes one moment from the others, constituting a special “moment of being’ that must be remembered and turned into an art?

Lauren Allen’s abstracted photograph feels vulnerable and intimate. There is a moment of existing inside the in-between space. We are suspended. Is it quiet or silent? Quiet as being a place where expression can spring from, and silence as a moment of withholding. Allen generously leaves this interpretation to us.

Vian Borchert’s impassioned visceral handling of paint hovers between abstraction and representation. A bright and harmonious moment in unhurried meditation of landscape and air, and of wander and daydreams.

In juxtaposition to Borchert’s calm, Rita Holcberg offers a wandering of scribbly forms, framing and reframing positive and negative space, building up a surface, and exploding the mark past the edge. A density of buried emotive force.

Richard Keen finds maximum expression and a strong sense of the transcendental in reductive abstract painting. Keen’s visual language conveys clarity of thought in two layers – one as loosely dripped background and the other defined by primary shapes and a determined line.

For Paul Lorenz, identity is three-dimensional, comprising what is seen, heard, and felt. “Convergence, 150 Lines” is a drawing and music score “exploring density and convergence of random lines.” Lorenz uses sound as a material and asking “what does a line sound like?” He is showing us the possibility of a visual art being vaster than that which can’t be described by the tactile form.

Obilala Nwankwo creates his own “world of beauty without boundary,” and “give lives to a dead thought.” Nwankwo painting style has the feel of historic narrative in portraiture in conversation with contemporary culture. In “Wedding Night,” we feel like we have stumbled upon someone else’s private moment.

Gerri Rachins’ work revels in a space filled with the disorienting complexity that embodies the aura of life. Deeply rooted in color theory and materiality, Rachins knows just the right moment to inject her radiant palette with weight or with an unsettling instability, taking push/pull to a dazzling new level.

Regina Walker takes pictures of New York City. Her photograph, “East River Before the Storm,” has the effect of a piercing NOW. Walker’s camera found that moment of dynamic engagement between body and mind, organism and environment, self and other, nature and culture now understood to be mutually informing, interpenetrating, inseparable.

Mark T. Wright’s work is particularly fascinating because it emerges from a startling number of re-compositions, a reclamation of drawings layered carefully on top of each other. Something about collage speaks of immediacy. Wright references Catholic iconography, and calls on the personal, deeply, in no way simply on the surface.